On Saturday morning we participated in the 45th Annual “It’s a Wonderful Life” in Plantation Holiday Parade. It was fun to be apart of this Plantation tradition, had out candy, and to see looks on everyone's faces when they saw SKIII.
Posted by sphssolarknights at 2:30 PM No comments:

Due to the exposure and contacts we gained at the Florida Energy Summit, Chris Heshmati of the SECCC invited us to this expo which we were able to attend today. This was another great opportunity for PR and networking. We meet with local officials such as Patrick Sheehan, The Sun Sentinel, Beacon TV, and Channel 10.
Posted by sphs engineering at 1:10 PM No comments:

Today we went on a fieldtrip to Bergeron Rodeo Grounds. We participated in mock job interviews and operated heavy equipment. We were also able to see how engineering and the instruction industry go together.
Posted by sphs engineering at 1:51 PM No comments:

This year the Florida Energy Summit was held in Orlando and some of our members had the chance to attend. It was a wonderful opportunity for us to meet and network with industry leaders in the alternative fuel industry. SKIII was showcased in an outdoor exhibit with vehicles such as the Chevy Volt, and Telsa.
Posted by sphs engineering at 1:49 PM No comments:

Today we had an awesome fieldtrip to Bombardier Areo with SKIII. Our club members shared their knowledge with the Bombardier Areo engineers and they shared their experience and skills. Soon after everyone was tossing around ideas that would make great modifications to the car. Later went on a tour of the facility and got to see what goes on behind the scenes. 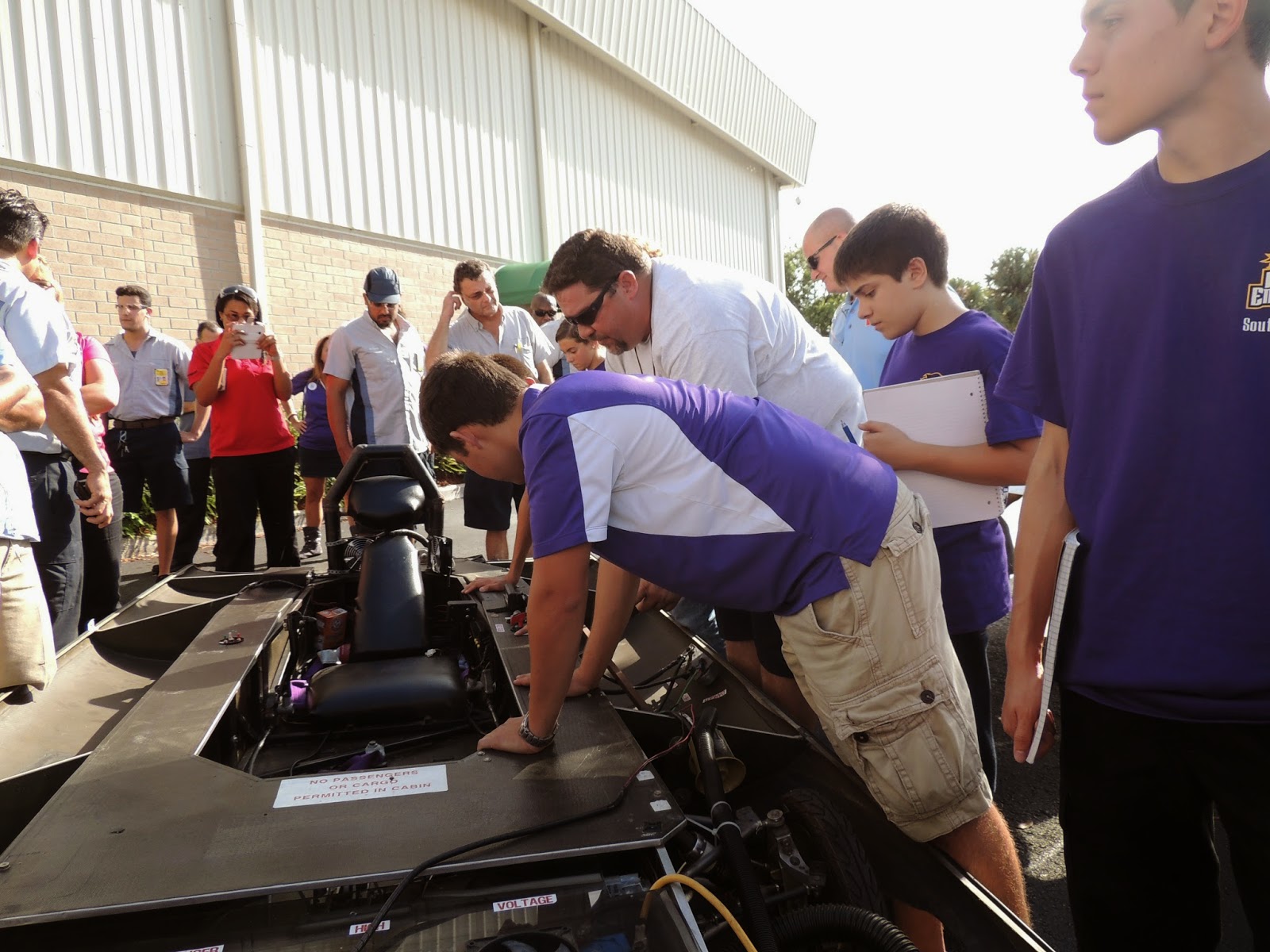 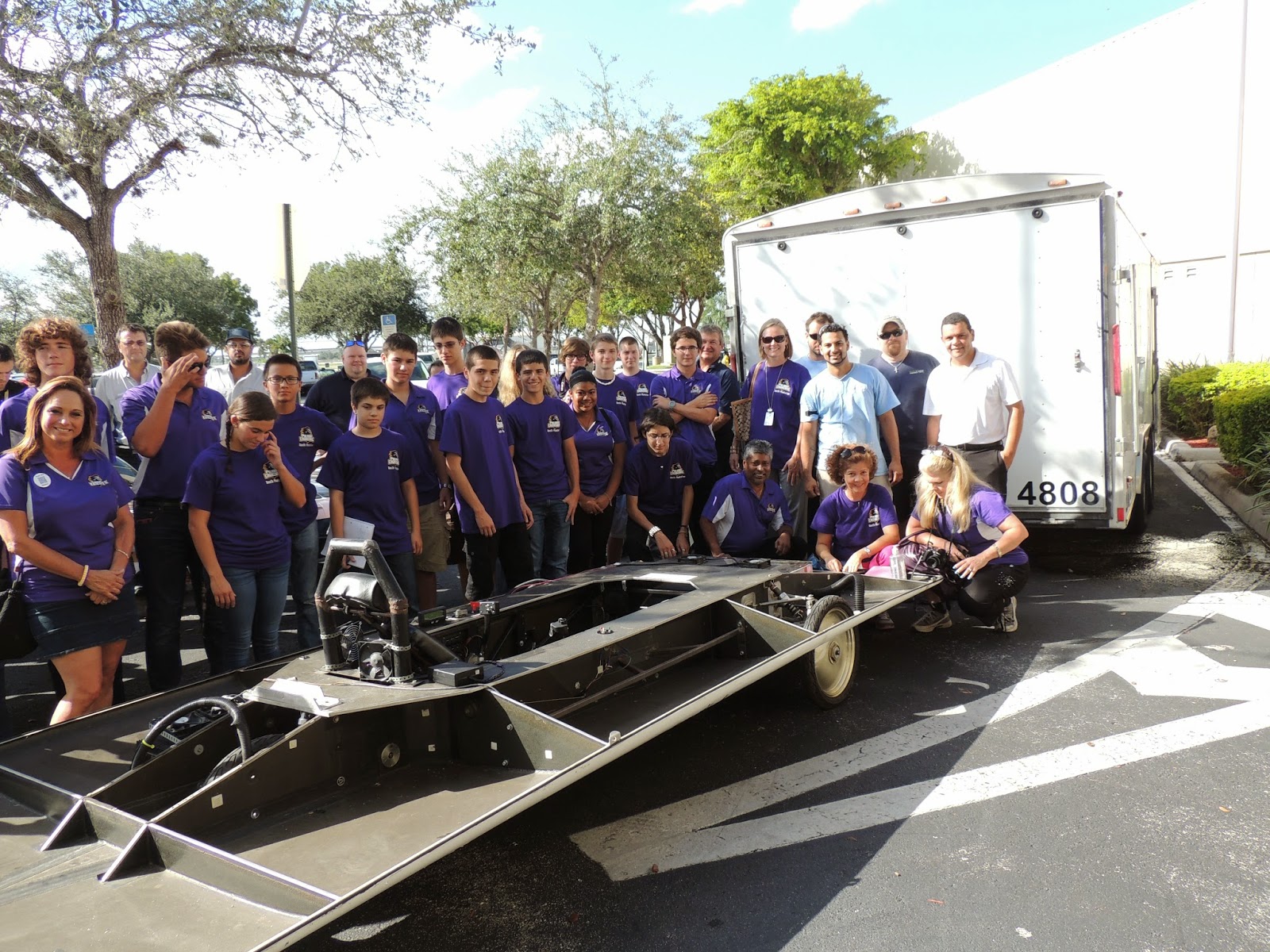 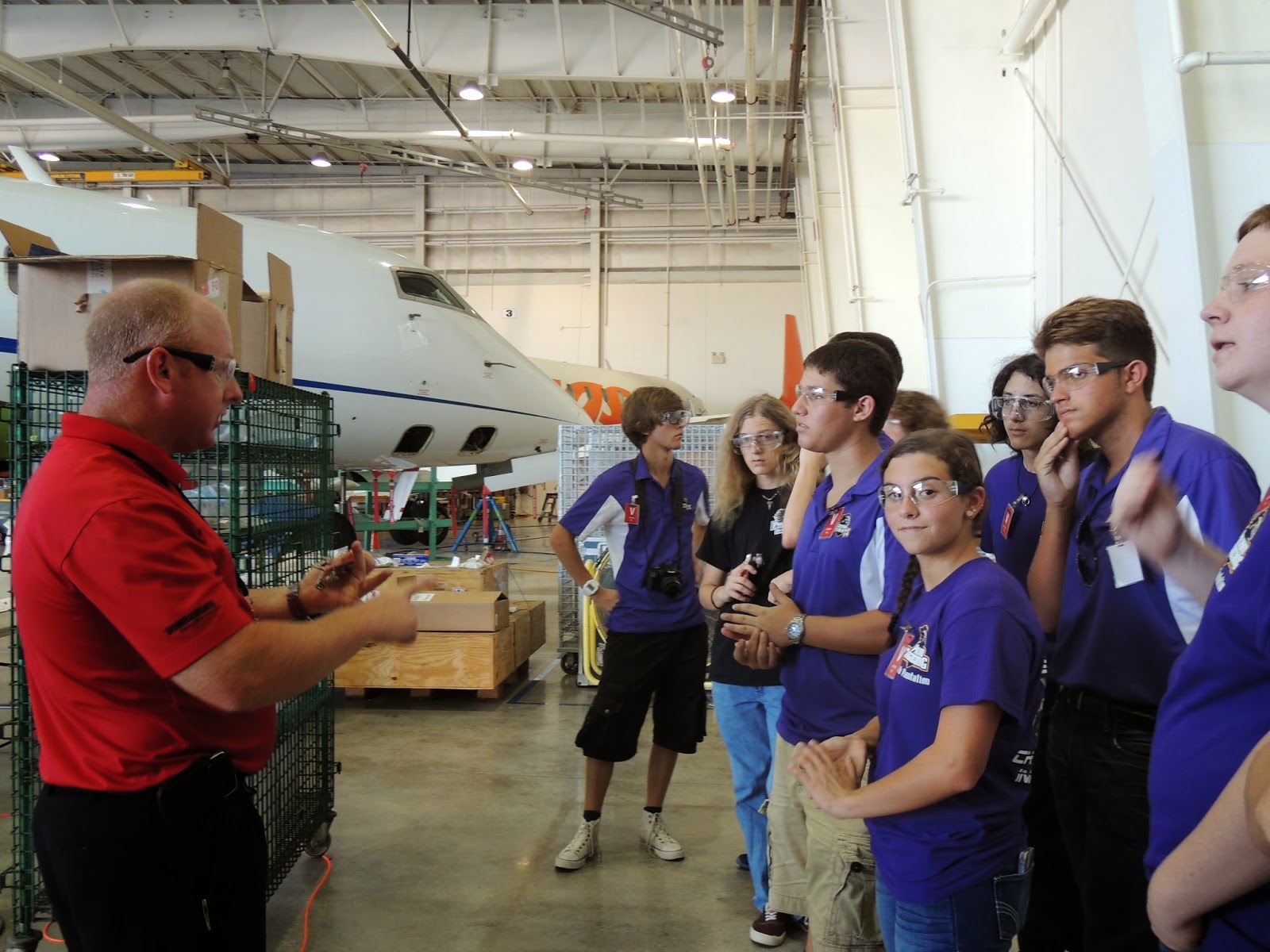 Posted by sphs engineering at 1:12 PM No comments: Today we participated in our schools annual magnet camp for incoming freshman. We had a lot of fun meeting new student that were interested in engineering and solar. We also helped them make and launch paper rockets from an air pressurized launcher.
Posted by sphs engineering at 2:39 PM No comments:

We would like to give a big thank you to Luis and El Garage Tv!
We meet Luis at the Fort Lauderdale Auto Show and said he loved what we did. He then asked if he could come by our school to get a ten minute interview. We were excited to have that awesome opportunity to be interviewed by a television show that broadcasts throughout the world.

We had David Millar, one of our senior members, get interviewed because of his awesome "TV personality".
After the interview we took Luis down to the track to give him some footage of the solar car in its natural environment (but at a much small scale). 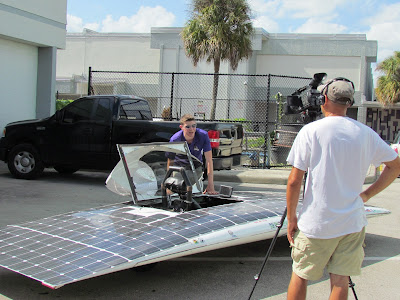 David  talking about the cockpit while being filmed. 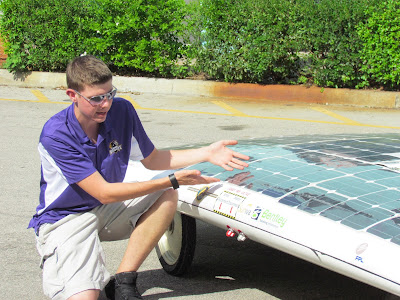 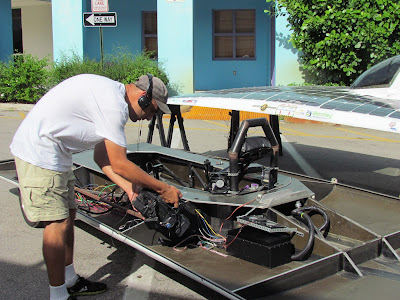 Luis, our film guy from El Garage Tv, taking some shots of the motor controller. 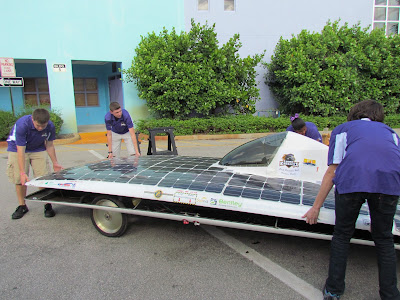 Some of the team putting the array back on to take it to the track.

A short video of Solar Knight III (SKIII) on our school's track.

A Busy Week Paid Off

We have been really busy for the past couple of weeks preparing for an awesome opportunity, The 22nd Annual Fort Lauderdale International Auto Show. We had an awesome set-up thanks to a very generous company Regal Show Services that did and outstanding job organizing the Auto Show.

We met Elliot Wachman at Broward County's Go Solar Fest. He felt like he could help us reaching our goal for this year's race. He along with Cliff Ray invited us to the auto show. As we were setting up we were amazed by the size plot Regal Show Service donated to our team. We had the same surface area as Jaguar, Subaru, and the Lexus LFA. We are so grateful for their help, we are still getting in donations and emails from the many contacts we made at the Fort Lauderdale International Auto Show.
Thank you Elliot and Cliff! 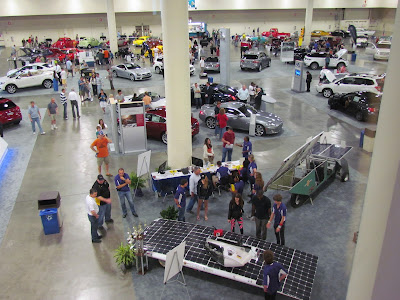 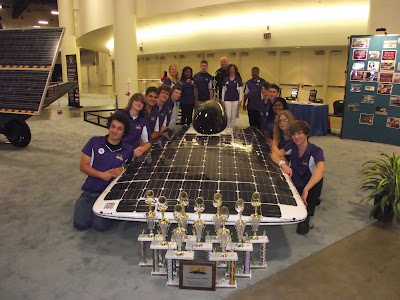 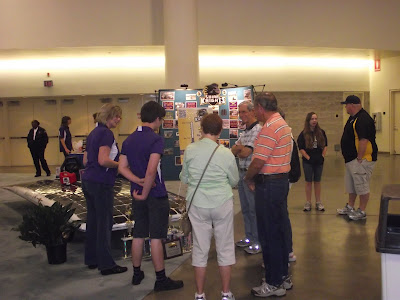 Posted by SPHS Solar Knights at 9:30 AM No comments:

We have been really busy for the past couple of weeks preparing for an awesome opportunity, The 22nd Annual Fort Lauderdale International Auto Show. This event will hopefully bring in many connections and sponsors throughout the automobile industry and the community. This support will help us raise our goal of $30,000 for our upcoming cross-country race this summer, Texas to California. We are the ONLY solar racing team in Florida to participate in a national race in both the high school and university level!

The show dates and times are:

Last Wednesday we had an awesome workday. Not only did we start on modifying the battery box to comply with the 2013 Solar Car Challenge Race Rules, but we also got interviewed by Doreen Hemlock and Taimy Alvarez from the Sun Sentinel. They wrote a terrific article about the Solar Knights and how we are raising $30,000 for our cross-country race this summer, Texas to California. Please follow the link to view the article written by Doreen and photos captured by Taimy. We cannot thank them enough for getting our team out in the public and corporate view. 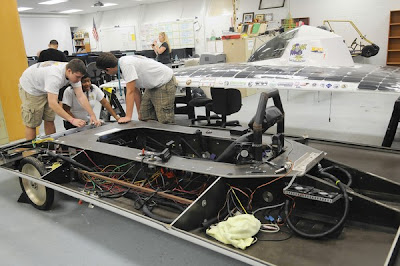 
Posted by SPHS Solar Knights at 3:35 PM No comments:


The Solar Knights are extremely grateful for all of our sponsors that help aid our effort to compete every year in the Solar Car Challenge. Everything we do, could not be accomplished without the help (whether it be money, resources, or knowledge) of our sponsors.
At this time, the Solar Knights would like to extend a special thank you to one of our most faithful sponsors: Hypower Inc.

Hypower Inc. is an energy company, working to further alternative energy resources in this country. They have taken a special interest in our solar car because they believe in the future of solar power and using more conventionally, like in cars.
For more information about Hypower Inc. the entire Solar Knights Racing Team encourages you to visit the Hypower Inc. web page.

Once again, we would like to thank Hypower Inc. and all of our sponsors for your help, thus far, this year.

Posted by SPHS Solar Knights at 11:21 PM No comments: 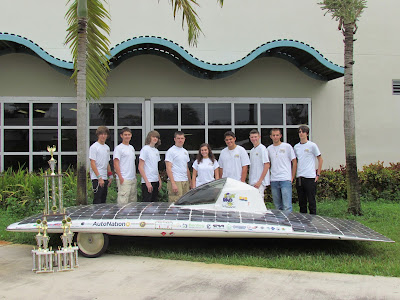 The Solar Knights take a picture behind SKIII with last years race trophies for the 2013 Solar Car Challenge race this summer and the annual Race Booklet, in front of our magnet building.
Posted by SPHS Solar Knights at 6:56 PM No comments:

Hi! We are the South Plantation Solar Knights racing team. A group of extremely talented students who have built a fully functional solar-powered race car, Solar Knight III. We were the first team to compete in the challenge from the state of Florida. In 2011 we won first place in the Advanced Division at the Solar Car Challenge. We were also awarded the William Shih Award, which is presented to the solar car team displaying the highest level of technological achievement. We were lucky enough to race again in 2014, where we proudly took third in a hybrid, track and street race. The also received the Matt Tunnell Award, which is awarded to the solar car team displaying outstanding driving performance. After a year of rest, we plan to return to the challenge and take first in the Advanced Division. This year, we'll have to repair our old motors, rebuild the car's steering and suspension, improve the canopy, and repair the car's carbon fiber body. To accomplish this, though, we'll need the help of friends, companies, and mentors! We have had some amazing partners over the course of team's history, who's names are represented on the body of our car. Any sponsorship or donations are always greatly appreciated. You can visit our website, solarknightsracing.org, for contact information.

If there is any incorrect/ missing/ incomplete information or if you would like your information changed, please let us know at:
sphssolarknights@gmail.com

Input Your email to get updates from the solar knights


The Solar Knights are offering a unique opportunity for you to become a team partner and invest in our project. Individuals, families, and small companies are welcome to participate in our “adopt-a-cell” program. The program offers solar cells for $20 each. There is no limit of how many can be purchased. Participating in the adoption program is tax deductible, and we would be happy to provide documentation of your donation. Supporting our team is simple! Just email the Solar Knights at sphssolarknights@gmail.com and we can send you all the information you need to be a Solar Knight Sponsor.
We are a 501(c)(3) Not-for-Profit Organization
Thank you for your support!!!